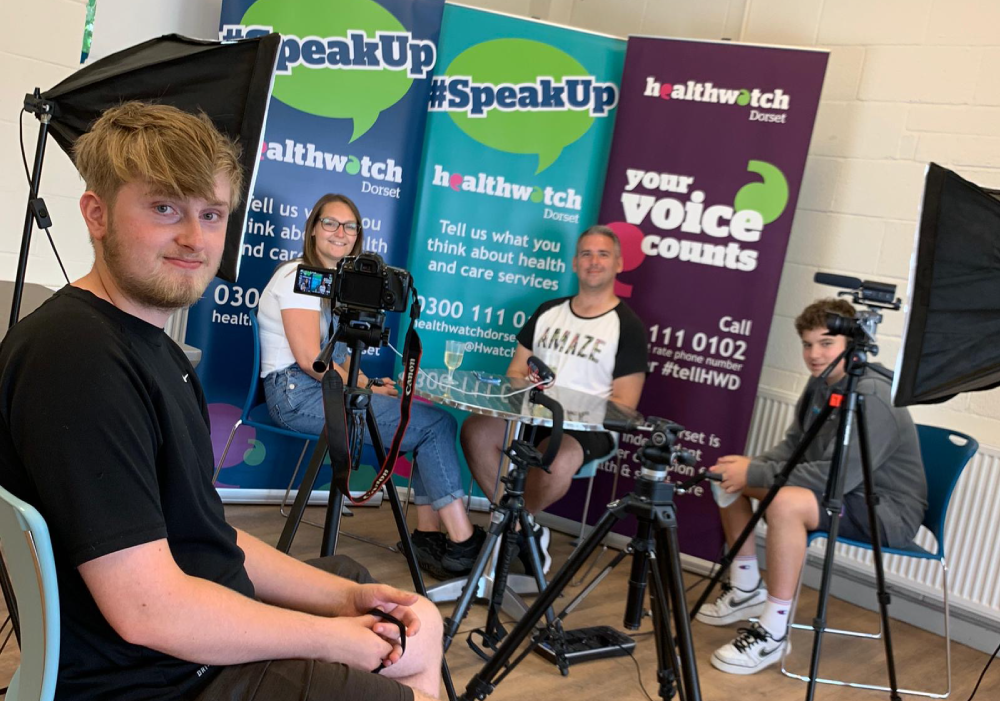 The film crew and Healthwatch Dorset volunteers (L-R): Lori, Shannon, Will and Charlie.

A new film out today from Healthwatch Dorset (released to coincide with World Mental Health Day on 10 October*) shows local people sharing their mental health stories to raise awareness of the challenges people face and the support that makes all the difference – especially the value of talking.

The film has been produced by Healthwatch Dorset in response to public feedback they gathered this year about local mental health services.  The main message in the film, linked to World Mental Health Day, is that people’s mental health can be affected at any time, by a wide range of circumstances, and it is always ‘okay to talk’.

Healthwatch Dorset volunteers, Shannon, Will and Elaine, feature in the film, sharing their very different personal stories. They chat candidly about the issues they have faced, and the ways in which they have learnt to manage their mental health.

Shannon spent most of her twenties in a wheelchair due to a chronic back problem, but thankfully, following three major operations, she has now regained almost full mobility.  Will lost family members at a young age and this effected his mental health.  They both believe that talking to their doctor and their friends helped them in their recovery, and they are both now able to recognise when they are feeling low.

Shannon said: “I wanted to take part in the film because I knew that talking about my mental health on camera would take me out of my comfort zone, and by talking about it, it would help me and other people.”

Elaine was left her in a coma after a sudden illness, and she talks in the film about the subsequent impact this had on her physical and mental health.  She struggled for a long time, before eventually confiding in a friend about how she was feeling – talking made a difference.  Elaine also attributes a lot of her recovery to nutrition and exercise.

Lucy Cribb, Healthwatch Dorset Engagement Officer, said: “Healthwatch Dorset talks to local people about their health and social care experiences, to find out what works well and what could be improved, so that we can inform those responsible for delivering and improving local services.  Real life stories are a powerful way to illustrate people’s health and social care needs.  This film complements our ongoing work investigating and sharing people’s experiences of mental health services in Dorset.

“I would like to thank our wonderful volunteers for talking to us, and for being filmed while doing so, to help raise awareness about mental health.  I would also like to thank Aztec Media, a local film and media company that helped us produce the film, along with two Film and Media students from a local college who wanted to gain some editing experience.” 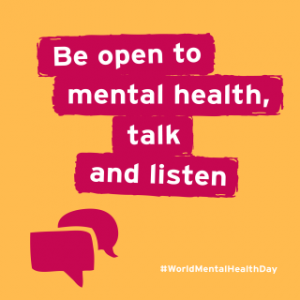 This year, the message for World Mental Health Day is a call on everyone to open up to mental health, to talk and to listen.  We all deserve to feel safe and supported when talking about our mental health.  But too often, mental health stigma leaves people feeling isolated and ashamed.  At worst, it prevents people getting support, finding employment, or having open conversations.

Keeping in touch with your friends and family and talking through your concerns can really help.  If you are worried, Connection is a 24/7 phone helpline for people of all ages in Dorset who are experiencing mental health issues and need support.  Call 111 and select ‘mental health’ or dial 0300 1235440 to access support as part of the Dorset Crisis Response Service.

This website uses cookies to improve your experience while you navigate through the website. Out of these cookies, the cookies that are categorized as necessary are stored on your browser as they are essential for the working of basic functionalities of the website. We also use third-party cookies that help us analyze and understand how you use this website. These cookies will be stored in your browser only with your consent. You also have the option to opt-out of these cookies. But opting out of some of these cookies may have an effect on your browsing experience.
Necessary Always Enabled
Necessary cookies are absolutely essential for the website to function properly. This category only includes cookies that ensures basic functionalities and security features of the website. These cookies do not store any personal information.
Non-necessary
Any cookies that may not be particularly necessary for the website to function and is used specifically to collect user personal data via analytics, ads, other embedded contents are termed as non-necessary cookies. It is mandatory to procure user consent prior to running these cookies on your website.
SAVE & ACCEPT